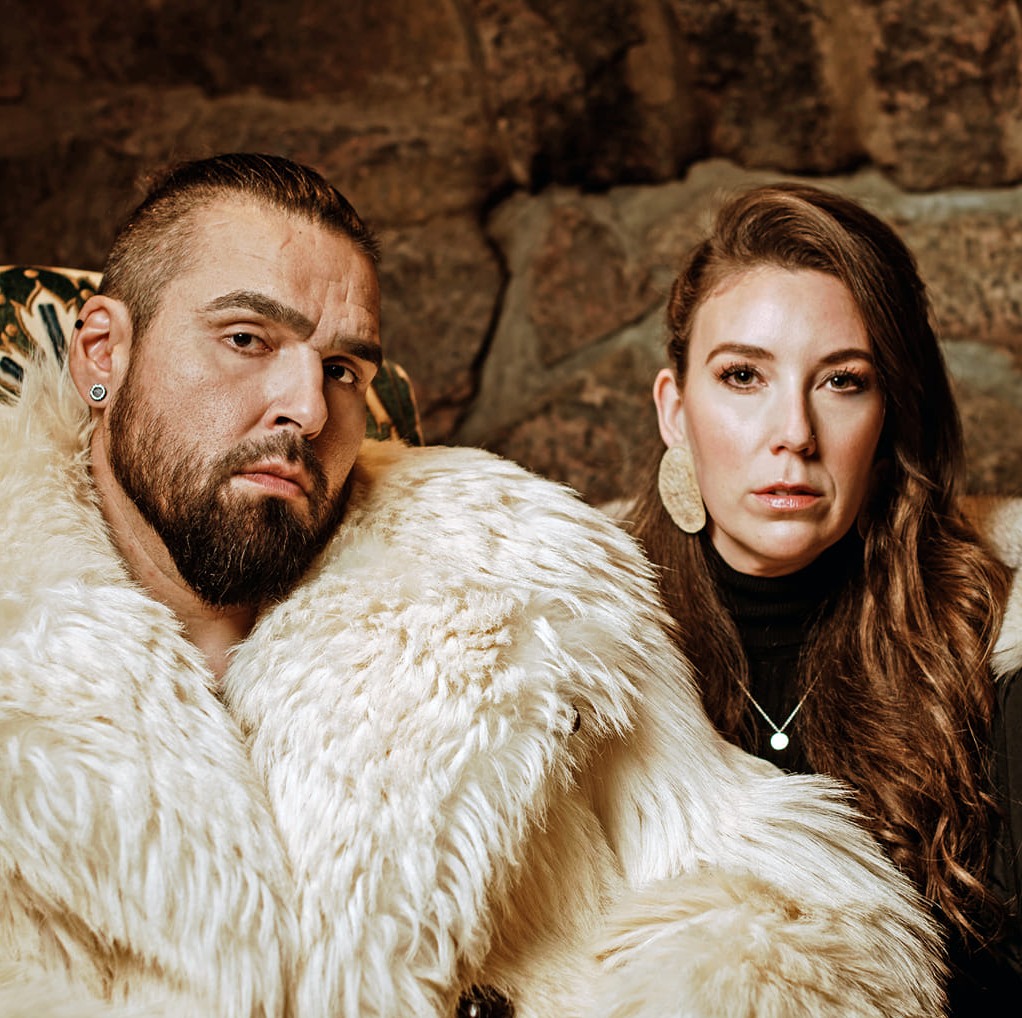 Twin Flames will shine brightly on a five-show tour of Northwestern Ontario, including a stop in Fort Frances on Tuesday, March 15 at the Townshend Theatre.

The Ottawa-based husband and wife couple have developed a unique sound that taps into their heritage as a couple. Jaaji (pronounced Yaah Yee) is Inuk and Mohawk and Chelsey June is Métis with Algonquin Cree heritage. Their music includes lyrics in English, French and Inuk and in a myriad of styles. In August 2020, they released their latest full album titled Presage. Their unique sound was a perfect fit for the Tour de Fort concert series, and organizers were thrilled to be able to add them to this year’s lineup.

“I think it just happens by accident, because we just happen to sing in whatever language we decide to sing in, at that time,” Jaaji said. “I think it also pays homage to where we come from and shows that no matter where you’re from, music has a way of bringing people together in one place and enjoying it, whatever language you’re in. you listen.”

Music can vary from folk acoustic shows that consist of just the pair, which audiences will see in Fort Frances, to full band shows, with other musicians joining in on a variety of instruments and leaning more towards the heavier rock side. of the spectrum. Chelsey June says it varies from show to show depending on the size of the event or location.

“I think it’s always been a fun thing, from the time we started in music we were trying to figure out what genre we could fall into,” Chelsey June said. “You know, we have different setups when we play. So Presage is with a full group. And we play major festivals and bigger events as a full band, which tends to lean much more heavily into the world of rock, into pop. Then when it’s just the two of us on stage, which has happened a lot more recently, because of the pandemic, it’s a lot more folksy.

Chelsey June also added that their music is constantly changing. They don’t try to fit one box or one genre, but the songs find roots in folk music before they were fully developed.

“I think a lot of songs when we write them, the roots are definitely in folk music. And then once we start layering them, we don’t really know what’s going to come out,” she said. “But I think it’s just that feeling, that sound, and just going with it. I think genres can be kind of like a box, right? It’s like constantly trying to put our music or ourselves in this box and I think art is something that is constantly changing, moving and growing, just like us as human beings.

They say there is a bit of an age gap between them, but they share many of the same influences in their music styles. Folk artists like Peter, Paul and Mary, Bob Dylan and Paul Simon. But they were also influenced by rock bands like Fleetwood Mac, Pink Floyd, Lynyrd Skynyrd and the Rolling Stones.

According to Jaaji, being an indigenous group has not come without difficulties.

“It’s that brown box you know, we’re channeled into the indigenous category and it goes straight to festivals,” Jaaji said. “Festivals ask for funding and they get Indigenous funding and sometimes unfortunately end up giving us only part of it and splitting the funding with the other non-Indigenous artists, which is pretty fucked up.

Chelsey June added that sometimes, because of their style of music, they are excluded from Indigenous musical circles and events.

They also said it was harder to get on the radio because some of their songs incorporate all the languages ​​they sing in. When they perform live, they take the time to explain what they’re singing about, but unfortunately they don’t have that opportunity. on the radio.

Despite coming out during the pandemic, Chelsey June says her third album, Presagehas performed well since its release, garnering positive reviews and reviews.

“We were initially told not to post [Omen] during the pandemic. But we’ve never really listened to the way the industry is organized, I think we’ve always approached things totally and completely our way,” said Chelsey June. “So we published Presage August 28, 2020. And the album did really well, as far as reviews and reviews and things like that. But obviously, we could not visit it.

Typically, many musical artists go on tour to promote a newly released album, but due to pandemic restrictions, many concerts and festivals have been canceled in the past couple of years. They will play songs from Presage as they tour in the spring and summer and have full band dates and will be able to play songs from the album.

Since forming Twin Flames, the duo have been nominated for 24 music awards, winning two Canadian Folk Music Awards and three Native American Music Awards. They had two number one hits on the Indigenous Music Countdown Top 40 and played over 1,000 shows across Canada, Greenland, the United States, Australia and France.

Twin Flames performs in Fort Frances at the Townshend Theater on Tuesday, March 15. Tickets are available at Ski’s Variety and the Fort Frances Library Technology Center for $25. They will also be in Dryden on March 16. Their new album Presage is available to stream on Spotify and can be downloaded from their website twinflamesmusic.com.