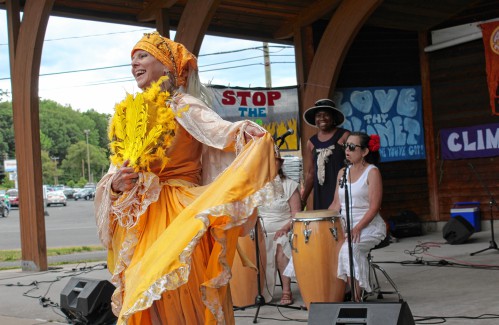 TURNERS FALLS – Dozens of people packed Peskeomskut Park to listen to live music and heed environmental messages during Saturday’s second annual “Honoring the Land” gathering, the cool air and mild temperature a reminder of what the climate activists fight to preserve.

Overall, organizers have sought to build on their tradition of advocacy against large-scale solar projects that destroy forested areas, while expanding their reach to address the impact of FirstLight Hydro Generating Co. on the Connecticut River ecosystem.

The environmental rally, held from 2 p.m. to 6 p.m., included musical performances, poetry and speeches. The Bruce Katz Band was joined by local residents Joe Graveline and Tom Neilson as musical performers, Don Ogden presented poetry, and speeches were given by Graveline, Karl Meyer, Gloria Caballero-Roca, Fred Beddall, Bill Stubblefield and Susan Masino. There was also a raffle and environmental advocacy petitions were available for attendees to sign.

Welcoming those present, organizer Janet Sinclair introduced the rally guests as “local heroes”. First to take the stage was Graveline, a resident of Northfield who began by paying homage to the tribal peoples who occupied the area before European settlement.

“We pay tribute to these people and the fact that they left us a land that was well cared for,” said Graveline. “Indigenous people viewed their relationship to the land as, ‘We are the land. The earth is us.

Continuing, Graveline stressed the importance of preserving “the relationship that each of us has with the sun”, advocating for climate awareness and healthier methods of establishing solar panels. He then expressed concern about the state of the Connecticut River, which environmentalists say has been ravaged by half a decade of operations by FirstLight.

“This river definitely has a spirit and that spirit has been challenged over the past 50 years,” Graveline said. “It’s time we took care of this river as if it were your son or daughter.”

FirstLight has submitted its amended final license application to the Federal Energy Regulatory Commission (FERC) for a new 50-year operating license. The three facilities being re-licensed through FERC – the Northfield Mountain Hydroelectric Pump Facility and two hydroelectric dams at Turners Falls – have been criticized for their impact on fish populations, the Connecticut River and the surrounding environment.

Meyer, a member of the Society of Environmental Journalists, continued that message after an energetic performance by the percussion group Agua y Bosque.

“It’s hard to talk about a river that’s barely alive and has barely been alive for about half a century now,” Meyer said at the start of his speech. “I have 10 minutes, and yet, I’m going to walk away from this feeling of failure.”

Meyer argued that all organizations tasked with maintaining the health of the Connecticut River have failed. He then focused on FirstLight and Northfield Mountain in particular, calling it a natural gas-dependent “grid parasite” that operates “the deadliest machine ever installed on the Connecticut River.”

“Please never think Northfield (Mountain) has anything to do with hydropower,” he said. “All that matters is the weight of the water.”

Meyer cited ISO New England and the United States Geological Survey’s National Water Information System as resources providing statistics and visuals illustrating the damage the energy company is causing to the Connecticut River and the environment. .

Even the music of the day included environmental sentiments, with Tom Neilson and Lynn Waldron dueting such as “Climate change has caused disruption and there’s no snow at all” and “What do we get for our trees? Asthma, cancer and heart disease.

After about another hour and a half of addresses and performances, the Bruce Katz Band closed the rally with an energetic, bluesy set highlighted by Katz performing solos on both his keyboard and the Hammond organ simultaneously. Speakers and event-goers circled and danced on the green as the Earth cooled for the evening.