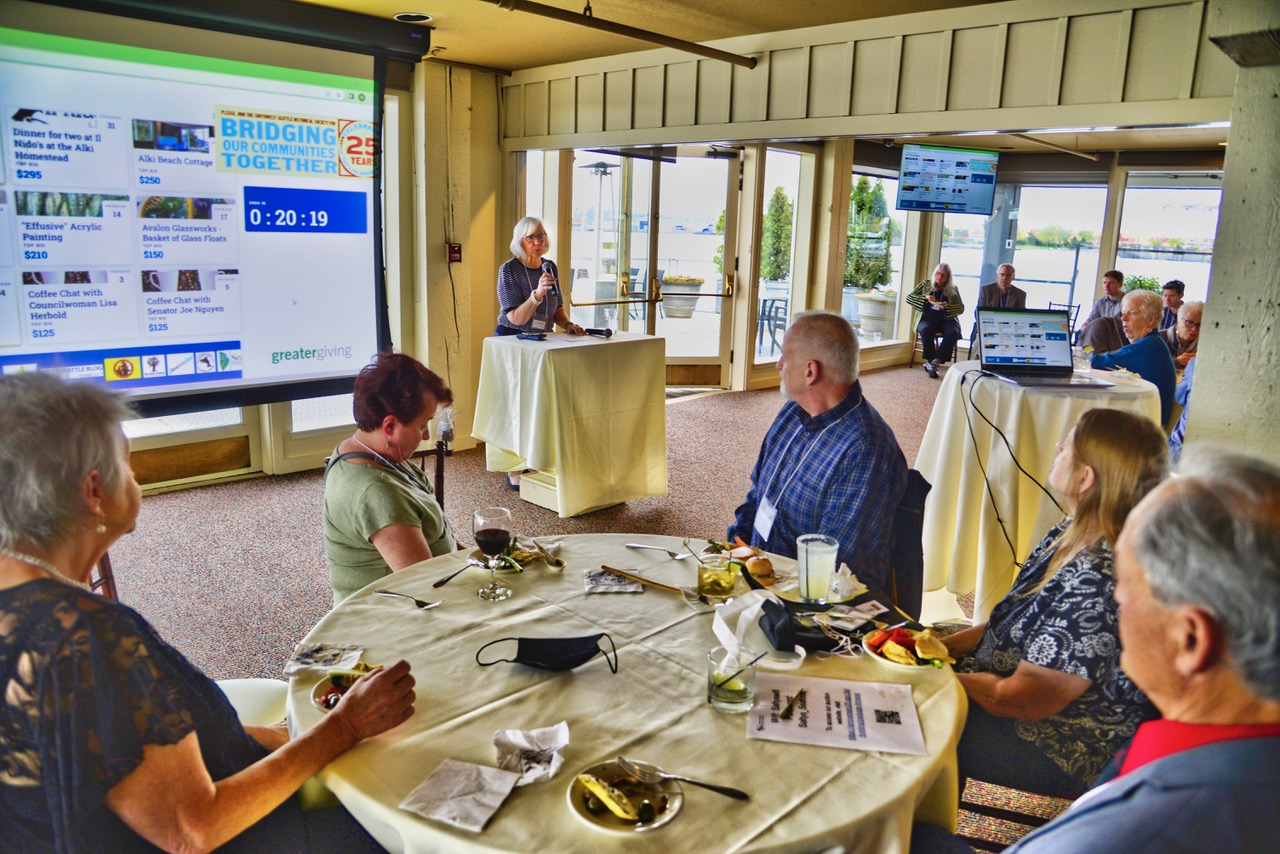 The Southwest Seattle Historical Society celebrated 25 years of its own history at Salty’s newly renovated event space on June 3. The event featured West Seattle luminaries such as Luna Park Cafe owner and community activist John Bennett, owners of Salty Gerry and Kathryn Kingen, former museum executive director Clay Eals and wife Meg, L he event was also a fundraising auction to help fund a new roof for the museum as well as a new handrail. The museum recently received a $26,000 grant for this purpose and hoped to match that amount through donations and auction proceeds.

The Rotary Club of West Seattle donated a “Peace Pole” to the Society, one of three Peace Poles to be donated this year.

One of Rotary’s main areas of interest is the promotion of peace in the community and in the world. The Peace Poles symbolize the unity of mankind and our leading wish for world peace. There are more than 250,000 Peace Poles around the world, including several in West Seattle. The pole’s message is presented in Farsi, English, Cambodian and the language of the indigenous Duwamish tribe.

The power of the message, ‘Let there be peace on earth’, lies in its ability to bring people of different cultures, religions, traditions and political ideals together into one united global heart and mind.

The SWSHS had to struggle at first to get a house. Here is some information about their history from their website www.loghousemuseum.org:

“The Southwest Seattle Historical Society was founded in 1984 by West Seattle resident and White Center realtor Elliott Couden. The founding members chose to dedicate this organization to historic preservation, heritage education, and community service. for the Duwamish Peninsula, including West Seattle and White Centre.

In 1983, South Seattle Community College formed a lay advisory council for the humanities with a grant from the National Endowment for the Humanities. Joan Mraz, a humanities and arts professor at the college who chaired the advisory board, was looking for someone representing the area’s history to serve on the board. Dottie Harper, a local Burien community activist, recommended Couden, who was trying to form a local historical society. Couden was invited to serve on the board, and there he shared his vision.

Founding members of the historical society came from West Seattle and the White Center, and their scope included those areas after meeting Jerry Brockey, president of the university, and Normie Beers, former longtime secretary of the House of Commerce of West Seattle and director of the YMCA who had compiled documents. for a local history book. The vision was to create a history center that would cover the entire Duwamish Peninsula.

Brockey offered the university campus for meetings and storage of the collection. The idea for Beers’ book was absorbed into the West Side Story book project and published by the West Seattle Herald/White Center News in July 1987. Articles editor Clay Eals served as the book’s editor and project manager, and Brad Chrisman, editorial coordinator, did the basic research and wrote most of its chapters.

The founding date of the Southwest Seattle Historical Society was November 13, the date of the landing on Alki Beach of the settlers who eventually formed the city of Seattle.

In 1993, the Southwest Seattle Historical Society became aware of the impending sale of a log building at the southwest corner of 61st Avenue SW and Stevens Street SW that was built as a shed for Fir Lodge/Alki Homestead in 1904. Also in 1993, Metro was building a sewer pipeline under West Seattle and had created a $500,000 mitigation fund for the Alki/Beach Drive neighborhood. The historical society placed a measure of $200,000 on the community ballot, and in March 1994 local residents voted to spend that amount on purchasing the building to use as a museum.

In a pact with the City of Seattle, the historical society acquired, restored, and converted the building and named it the birthplace of the Seattle Log House Museum. The restoration was made possible through a grassroots effort led by Board Chair Arlene Wade, which raised more than $875,000.

The museum has been open since November 13, 1997, the 146th anniversary of the Alki landing in 1851. The landscaping consists of native plants. A granite and marble donor circle adorns the courtyard in tribute to the many individuals and organizations who help make this heritage project an award-winning facility and a community treasure. »

The Southwest Seattle Historical Society recognizes that the Log House Museum is on the traditional land of the dxʷdəwʔabš (Duwamish) people, past and present. The museum is built from logs that grew on the land before the arrival of non-indigenous people. We gratefully honor the land and the people who have preserved it through the generations.