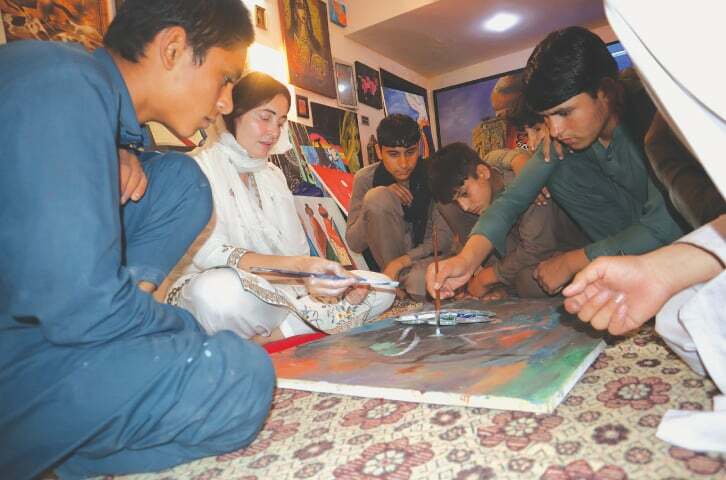 Jalwat Huma, dressed in white with a white chadar on her head, sits surrounded by children aged 12 to 18. Most of the children are wearing dirty and torn clothes, their hands stained with blue, black, red and white paint. With a canvas lying in front of her on the floor and a paintbrush in her right hand, Huma teaches her young students brushstroke. The children follow her step by step according to her instructions.

Huma teaches the art of painting and drawing to street children and garbage collectors in Hayatabad, a suburb on the western outskirts of Peshawar, bordering the former Fata district of Khyber Agency.

Huma established his institute, named Rang-Geet Art Gallery, in August 2021, assigning him a three-room basement of his house. This is where scavengers, street children and uneducated women from the Khyber and Peshawar tribal districts come to learn painting and drawing. Rang-Geet Art Gallery opens at 11 a.m. and stays open until 8 p.m. Students come in groups at their convenience. The female students show up in the morning because they are not allowed to go out late in the day, while the males normally come in after 3 p.m., after their day’s work.

“Nobody thought of these children, they are the ignored ones”, says the art teacher, looking lovingly at the children around her. “They are left behind in the course of life. Society pushed them into the dungeons of darkness. I dreamed of a place where such children could express themselves. I wanted to give them the means to express themselves through the brush. I knew that painting had this power of expression.

A woman from the Hayatabad area of ​​Peshawar runs a voluntary training center for street children, teaching them the power of expression through painting and drawing

“Art requires no formal education. Only the colors and the brush can do the trick. Therefore, I chose the motto: ‘Likh nahi saktay, bana tau saktay ho’ [If you can’t write, you can paint].”

Suddenly, a child comes out of a room, paintbrush in hand, shouting: “Baji, what do I do with the colors that mix in my canvas? He destroyed everything. It bothers me!” She replies with a smile, “We’ll see about that later. Just continue your work in the lower part of the frame.

Huma admits she didn’t have the same patience with children’s behavior when she started teaching them. With a smile on her lips, she declares: “Having grown up in the streets and on the roads, they have never seen the inside of a school. You could expect anything from them.

At first, the number of students coming to Huma quickly increased to 80, but now there are a more manageable 52, of whom 35 are street children and garbage collectors, while the rest go to school. More and more students want to join the Rang-Geet Art Gallery, but hiring a large number of students is difficult for Huma.

Financial pressure is a huge factor for her. Over the past year, Huma has invested around 80,000 rupees in paints, canvases and other equipment, which is an extra burden on his shoulders after his family’s household expenses.

In fact, at first her family, friends and acquaintances discouraged her: the idea of ​​opening a voluntary art school seemed ridiculous to all of them. She was told that she would waste her time with such children. They did not expect art from garbage collectors or street children. They laughed at her and considered her idea a failure. However, Huma says his students have proven all of his critics wrong.

“I can proudly show the work of these children to the world,” she says. “Their art is self-evident and those who demotivated me are now silent. Before, when people demotivated me, I thought before I went to bed, ‘what if I failed?’ Now I am satisfied with what I have done for these children.

A boy who worked near us was busy painting something quietly for an hour. He now asks her for help. Huma introduces him as Numan Khan of Bara, Khyber district.

Fourteen-year-old Numan joined the Rang-Geet Art Gallery nine months ago. He worked in a neighboring house for three years. In the evening, when he had free time, he used to go out to meet his friends at the nearby Nawab market. His friends had joined the Rang-Geet art gallery and talked about it all the time, which made him interested in seeing the place for himself.

One day he went knocking on Huma’s door. Having no confidence, he left without meeting her. On his second try the next day, however, Huma came out to greet him and took him inside to show him the studio.

Upon discovering that Numan was going to Rang-Geet, his father punished him. One day he shows up at Huma’s doorstep, looking for his son and intending to punish him again. Fearful, Numan took refuge with his angry father and asked Huma to meet his father outside. She had a conversation with the man and convinced him to let her son continue his art lessons. A month later, his father sent another 11-year-old boy, Numan’s brother, to join Rang-Geet. The two brothers are now among Huma’s top five students.

Numan worries about the future of street children and garbage collectors. “I see children like me in the street and I feel sorry for them. They need opportunities. When I learn and become an expert, I will teach the art of painting to those who live on the streets like me.

Huma shares her hopes of setting an example for others by converting the Rang-Geet Art Gallery into an institute for scavengers, street children and the illiterate. “I want to do something that the world will follow, and I’m adamant that I do it for the good of these kids,” she says. “I believe the world will be amazed to see their work.”

Initially, Huma focused on teaching painting, drawing and drawing, but over time she also started teaching music, English, Urdu and computer science. Some children have improved beyond expectations.

Huma plans to organize an exhibition to present the work of his students and share their successful journey as well as the fruits of his efforts.

“We will exhibit these children’s art and sell it for a very small price. It will be a motivation for them and will encourage them to use art in their future. Second, society will learn from the brilliant work of these children,” she told Eos.

The children learned to work using various mediums such as color in pencil, acrylic, watercolor and oil paint. However, they are currently preparing oil paintings which will be displayed in the exhibition.

Huma is optimistic that these children can play a vital role in society, but laments that they have been ignored by both government and society. “Isolating such creative minds is an injustice,” she says, “they are not the children of a lesser god.”

The author is a journalist based in Peshawar.