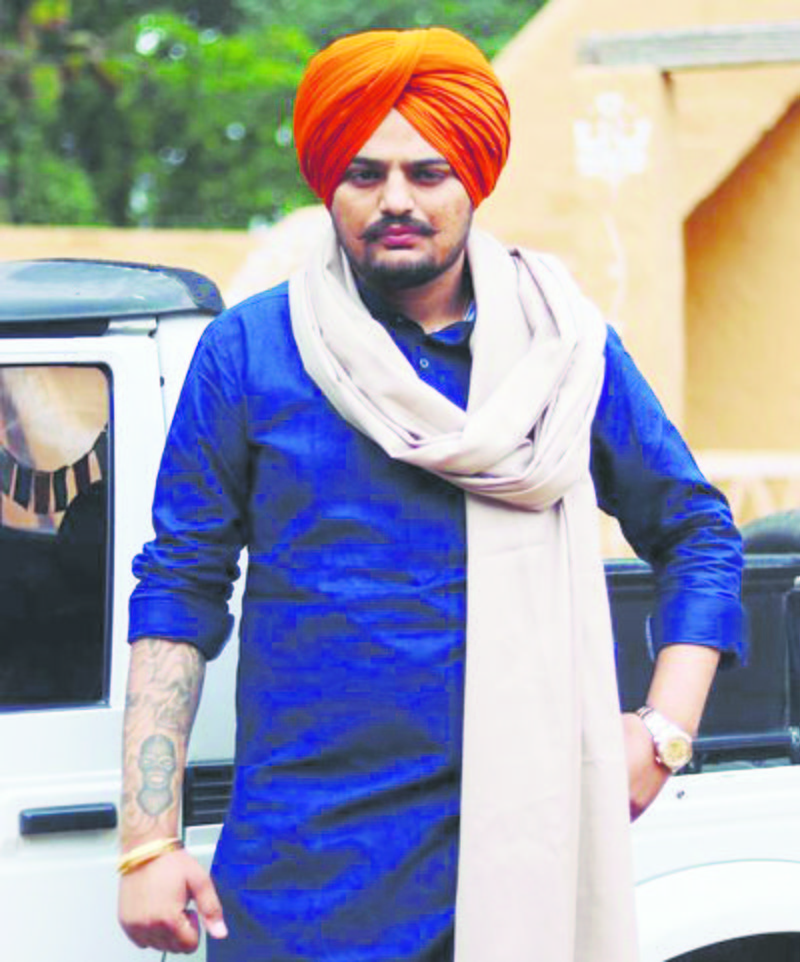 I haven’t listened to Sidhu Moosewala much. But it was hard to miss its mercurial rise, its near ubiquity. Amrik-Sukhdev dhaba in Murthal, our favorite pit stop on the way to the hills and my window into the Punjabi’s unconscious, played it on repeat. My very first introduction to his music was via the ‘G Wagon’ hit parade and I remember a shiver down my spine as I gleaned the lyrics from the distorted speakers and general cacophony: ‘ Jithe bandaa maarke kasoor puchhde, Jatt uss pind nu belong kardaa .’ (When you kill a man and then ask what his fault was, Jatt belongs to that village). Me, father of two teenagers and husband of a pretty woman, I suddenly felt exposed, vulnerable. The song and others like it had shrunk my safe space. I suddenly felt the need for security, tribal ties and nods to rude behavior to feel safe. All those little liberties won for the common man, especially women, by content and progressive arts, my own artwork playing a small part, seemed lost. The Punjab had died out, reclaimed by its own coarse memory. Contradictions abounded. All progress seemed to come down to form – chic interiors, cars, quiet air conditioners, giant LED screens, well-produced AV kitsch – hollowed out of all progressive aspiration, all at once. And this phenomenon has not been limited to its geographical borders. It raged in our peaceful hilltop sanctuary and in the Jat-Gujjar outskirts of NCR. ‘Punjab’ stretched to the rhythm of a silent and sinister beat.

The status quo suits silver foxes like me, whose insecurities about their identity have eased somewhat. But what about the young man, the gabhroo? How does he prove his courage, his worth to his farmer-warrior ancestors in an age of unsustainable agriculture, distorted language, the lure of immigration, the abject scarcity of role models, the easy availability of a “solution”? What is he doing?

It’s been two years. A former Jathedar from one of the Five Takhts invited me to present awards at the annual celebrations of a school he ran in a neighborhood dotted with guru shrines. Always looking for any excuse to follow in the wake of the gurus, I easily agreed. He met us outside his fortified dera and led us through two large creaking iron gates to the parking lot. Laughing at the elaborate arrangements, I asked him why they were needed. He looked at us grimly and said, “It’s bad in here, wait a minute, they must be on their way.” They’ll take your car apart in minutes and be off. They are the junkies, the zombies, the dragon hunters. This in a place with almost as many gurdwaras as inhabitants! “They don’t care about katha-kirtan anymore, Rabbiji!” Would you believe it, I was stopped in the middle of my sermon at a local wedding by the boys. They thought I was a party animal.

The next day we met the local SSP and his wife. His last post was in Mansa. So how did he like it here, I asked. Before he could answer, his brilliant wife, draped in indigo velvet, cut in: “Whew! Every time he went on patrol, my heart was in my mouth! How peaceful this place is in comparison I can’t begin to tell you.”

“The place is disturbed,” the SSP finally exhaled, staring at the floral patterns on the pandal roof.

Many other stories circulated: the routine assaults by the canal, the taxi driver who was hijacked and nearly thrown into it. The fun seemed to be gone from living in Punjab. One more time.

“Hey no! You can’t do that,” exclaimed Jas bhaji, our contractor, as he leapt up to snatch the big stick from his four-year-old grandson who, red with rage, was about to do it. crashing into his big brother, 10. A loud crash ensued. The little lord, all arms and legs now, wanted to go after his big brother who was rolling on the floor laughing. “What’s the matter? “I wanted to know. It turned out that someone had asked the four-year-old who he was, ‘a Jatt or a Dalit’, and before he could answer, his brother had answered for him. , “Not Jatt”. Even the toddler knew the importance of this arbitrary circle. He was not going to undergo an elongated casting. His rage was confirmation that the great Jatt indoctrination machine was working. It brought me back to my own childhood and my seances with my grandmother – Bhaabhii. The result of which are his many slogans engraved in the memory of the whole clan – ‘Jehdii nii zamiin, o ey kamiin’, ‘Sandhu-Sidhu ik baraabar, Gill zaraa ucheraa’ and more vitally in the bittersweet pill of identity that we cannot swallow or spit out. But don’t get confused yet. We are not victims. Just torn.

“Why should we give it up?” my buddy Sangha fumed over the phone in one of our many outbursts. “Our identity is our 10,000 year old history. Did someone give us the privilege on a set? We weren’t called ‘Chandaal’ in the Middle Ages? Doesn’t modern psychology recommend that you ignore the enemies and just play your own tune out loud? Why is this a problem when we are doing exactly that? And what is the real problem, is it the caste or the hierarchy? If caste, a way of filtering and prioritizing others like you, is wrong, then all social media, dating apps, clubs, schools, universities, associations, friendships… in fact, all of human social life.

“But surely you understand the power disparity?” I ask.

“Surely you understand the degrees…”

“Surely you understand the business.”

“And the call for violence, for firearms, for misogyny? I plead.

“Do you even watch Bollywood, southern movies?” he asks.

And so on, until one of us hangs up the phone. A perpetual stalemate. Jatt’s soul is still churning. And while it’s gone, make peace with the status quo.

Status quo. This suits silver foxes like me, who have circled the sun several times. Whose insecurity about their identity has eased somewhat. Who are reassured by the courtesies offered by gray hair. Who have less to prove. Whose chip on the shoulder is now a crumb. But what about the young man, the spring hen, the gabhroo, the young male? How does he prove his courage, his worth to his farmer-warrior ancestors, to the “Jatheraa” in a time of unsustainable agriculture, shrinking farms, eroding topsoil, depleting groundwater , of hordes of trans-Yamuna emigrants, of a deformed language, of the attraction of immigration, the abject shortage of role models, the ease of access to a “solution”?

What is he doing? The vaar his grandmother whispered in his ear plays non-stop. The tales of Jiiuraan Mor, Jagga, Mirza and Shaheed Singh Sahibaan appeal to him. Where is his war, the blaze of glory, the battle that will define him? You better bet your last aanaa will find it. Even if it means cutting the windmills, even if it means collateral damage, even if it means self-destruction.

They don’t scare him. He’s seen it all before. Don’t tell me the child of ex-farmers can’t tell agriculture from ecocide; the waaris of the Waris Shah poetry of rawness; Bade Ghulam Ali’s heir, Salamat/Nazakat Ali music from parody; the builder of Harappa, a dignified existence, of a rat’s nest; the child of Vaisakhi 1699, a real revolution, with lip service. Don’t worry, he’s just tripping, avoiding the bad trip. And when he wakes up, everything will be counted – the dead, the living, the comatose. Until then, we are all playing our part. Solidify your version of Punjabiyat. Look at the faces of your children. What would you like to pass on to them? Pass that. What light do you want them to reflect? Spread that. What song do you want them to remember you by? Sing that.

I didn’t really give Sidhu Moosewala my full attention until after he died, I should be honest. But in these last videos, I revisited my youth and the curse of Jatthood. The tyranny of a character that must be played endlessly once invoked. He’s a heavy character that we all need from time to time, but if you can’t let go of him, get out of it, he starts to lead you, take you places you never intended to. And in those videos, I saw him weighed down by that character. Because in reality, it is only a character. It is not the only suggestion that shapes us. The culture is much more porous now, although you might not want to admit it. But the seduction of it, Ah! Seduction. I’ve seen better men fail at his charm, what about the young engineer who I think desperately wanted to stay that way.

Of all the characters in this saga, it’s the death of this kid that touches me the most. In the death of his innocence, you could, if you wanted, see the death of your own innocence. Déjà vu.

Grieve Sidhu Moosewala as much as you want, but expand his circle to all of Punjab. Because they are joined at the hip. Grieving one without the other makes no sense. Maybe even a disservice to a bright young life cut off at its peak and us. Dig deep, because here we are now. “It” does not go away in a hurry. All Punjabis are going to have to play their love radio to its fullest. A big match is brewing. Forces greater than we can comprehend have been unleashed. This is just the beginning. No time for imported lifeboats, check your gharaa, Sohnhiye! Let Farid guide you:

(Farid, the way is muddy, the house is

far away, love seeks the beloved

Walk and see the blanket soak

or stay and watch love break)

— The writer is an acclaimed singer