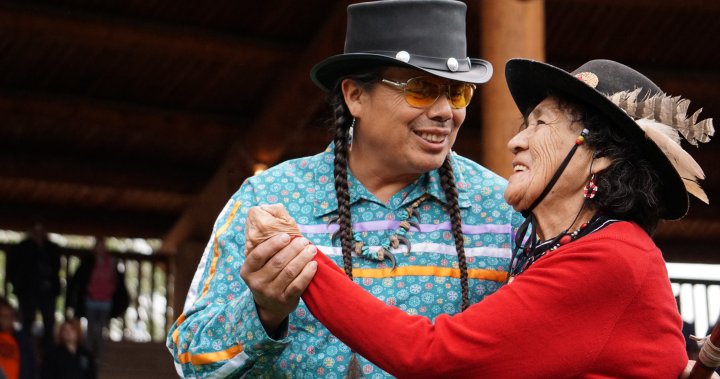 The Skeetchestn Indian Band member has been a singer all his life, but called his decision “on a whim” to step up to the microphone in the Powwow Arbor and sing in the Secwepemctsin language.

“Every time we share a moment like this, we take it upon ourselves to share our culture and our beliefs with people because it’s something that has been passed down from generation to generation,” he said. .

With woven sweet grass and his son’s drum in his hands, he shared a song by Lahal. It is traditionally played during tournaments, but Jules said he has helped his community in times of need and could do the same for those attending the one-year memorial for Le Estcwicwéy̓.

“It’s about bringing people together, lifting their spirits, giving them that good feeling, that choice of comfort,” he told Global News.

As he sang, he said he was thinking of his mother, grandmother, aunts and uncles who survived Kamloops Indian Residential School.

From the song of honor to the jingle dress dance, music and movement played a central role in the ceremony honoring the 215 missing children, whose remains are believed to have been buried at the former Kamloops Indian Residential School. . The event included many speeches and prayers, but at the end of the day, Kúkpi7 Rosanne Casimir gave a special shout out to drummers, dancers and singers.

“I can’t say enough how significant it was that we had so many of our cultural singers and dancers today. It was our resilience,” she told the crowd, standing next to Prime Minister Justin Trudeau.

2:24
Tk’emlups te Secwemc call on Justin Trudeau to do more to advance reconciliation

Particular attention was paid to the choice of songs performed at the Le Estcwicwéy̓ memorial, several singers told Global News. According to Iye’mitun Slahhwwaletze Sewedit, a guest cultural support worker from the Snuneymuxw First Nation on Vancouver Island, it all depends on the type of occasion.

He chose his grandmother’s prayer song, written by his great-uncle about her appeals to everyone in the Cowichan Valley to join her in prayer.

“I’ve sung it at gatherings like this here because we come together as one…coming together as one heart, one mind, one spirit,” Sewedit said outside the Powwow Arbor.

“It took me a long time not to break down and cry because I get emotional easily. It was good to sing that especially for everyone here at boarding school because I know what they have. lived.

The 10 a.m. event included both spontaneous song and dance and scheduled performances in at least half a dozen Indigenous languages, such as Secwepemctsin, Cree, Hul’q’umin’um and Sḵwx̱wú7mesh .

The Redrum Motorcycle Club, which includes survivors and intergenerational survivors of residential schools, sang “Happy Birthday” for Le Estcwicwéy̓, whose life was cut short. Paul Creek singers and dancers led the crowd in the song Celebration and Friendship.

“The celebration dance is done in honor of life and in honor of those who pass into the spirit world,” explained elder Charlotte Manuel, thanking her elders for passing on their knowledge.

The dancers moved together in a circle with open hands facing the sky. Manuel, a survivor of the Kamloops Indian Residential School, danced happily from her seat.

“It’s called ancestral work. We are here to do good service to our ancestors because we wouldn’t be here today if they hadn’t survived and passed on their oral traditions,” she explained, dressed in her grizzly bear regalia.

“It’s the medicine that heals us, that helps us thrive as a people.”

“It’s all about intention. If you have good intentions, your prayers will be answered,” she said.