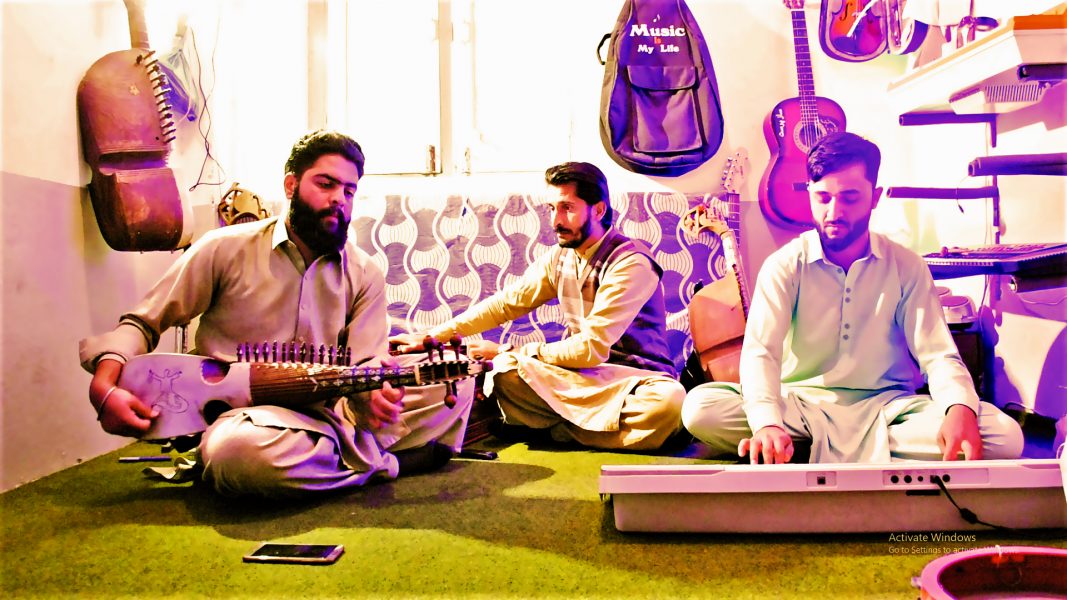 The place that was once the center of sectarian violence and military operations is now fighting extremism with music. Young people who grew up in the conflict zone established a music academy in Parachinar, Kurram district, a new tribal district of Khyber Pakhtunkhwa.

The Samma Academy of Music is the first institution of its kind in the Khyber Pakhtunkhwa tribal district. After the restoration of peace in the amalgamated tribal district, local youth are now learning to play musical instruments such as rabab, flute, tabla, harmonium and other academy instruments.

Among the many students, 23-year-old Waseem Hussain is a local resident and runs a drug store in Parachinar. He joined the academy to learn to play musical instruments. He has so far spent a year at the academy following his passion for the rabab.

Speaking to Bol News, he said the environment in the academy is very good. Every day, half an hour of theory lessons while another 30-minute practical session gives me joy and satisfaction, Waseem said.

He also said that it was difficult to find an academy or a place to learn music, but after peace was restored to the area, the dream of learning music came true.

While sharing his experience at the academy, the young music lover said the majority of academy students are from low-income backgrounds, while some students face resistance from their families to learn music. because of the taboos but nevertheless, they have a passion for it.

The institution created two years ago has more than 60 students learning about fifteen musical instruments at the academy. People from different walks of life, including students and CF officials, attend the academy to learn and hone their music skills.

The music academy also teaches 18 other students via video link who live abroad. The registration fee is between Rs 5,000 and Rs 10,000 per month, given the poor financial situation of the residents of Kurram district.

Imtiaz Hussain, 28, is the first tribal resident of Pakistan to be authorized by the district administration to run the Kurram District Music Academy. The founder of the first music academy in the tribal area is the son of folk singer Abid Hussain, from the village of Boghaki in Parachinar.

The founder of Samma Music Academy informed Bol News that the idea behind the music academy was to involve local young people in positive activities as they were brought up in the midst of clashes.

The music teacher believes that only music can defeat extremism. Young people in the region engage in positive activities like music, Imtiaz added.

The young owner of the musical institution said that he had always considered his father as a role model, and from childhood he began to learn music in addition to singing in the local Pashtun language.

The young trained musician wants to send a message of peace through the profession, he stressed.

However, the musician complained about the lack of resources to run the academy and asked for government support to better run his affairs.

Parachinar is the capital of Kurram District and shares an international border with Afghanistan, while in the interior it borders the Khyber and Orakzai tribal districts. In 2007, sectarian clashes in Parachinar turned into a larger conflict in which an estimated 700,000 residents of the region suffered for years. The army had to be brought to the region for almost four years. More than 3,000 people have died in the fighting while 13,000 families have been displaced.

Many locals appreciate the efforts of young people to establish the music academy in Parachinar. There was a time when the region was ruled by the Taliban and it was not even possible to have a music tape in the car, but with the restoration of peace here the scenario has changed dramatically as a music academy is now operational. here.

Maqbool Hussain, a young journalist from Parachinar, said people in Pakistan’s tribal belt are peace-loving besides being passionate about music, and urged the government to establish music academies in each tribal district.

The writer is an independent contributor