Today he revealed another brand new weirdly styled animated music video for his favorite album, ‘The Disembodied Yet Slither Among Us’, created by video animator Mahmud Geceksu and Joshua Ward, who provided video effects and additional tracks, both based on the album’s incredible artwork by Michal Xaay Loranc. The video merges perfectly with the mesmerizing tribal auras and ominous vibe of the track, creating a backing piece that accentuates the original mystery of the music itself.


Sanders says of “The Disembodied Yet Slither Among Us” and accompanying video: “I’m very excited to present music fans with a new video for ‘The Disembodied Yet Slither Among Us’. The psychedelic video and moving was a labor of love by personal friends.
“The Disembodied” video has original artwork by Saurian/NILE artist Xaay, animation by Mahmud Gecekesu, and special effects and additional titles by Joshua Ward. The video has a super immersive vibe, really mingling with the mood of the song.

I had the good fortune to know Mahmud when we worked together on the Serapeum project – Nader Sadek, Mahmud, Derek Roddy and I collaborating in Cairo. I really enjoyed his guitar work and had hoped that Mahmud would also play Oud and Saz on the Saurian album, but his busy schedule and the pandemic worked against us. However, it eventually turned out that Mahmud was also totally in for a video collaboration. Despite his busy schedule, Mahmud found time to do some amazing and mind-blowing renditions of the song while animating the cover of Xaay’s Saurian album. I’m really happy with how the video turned out.

Great appreciation and thanks to my Metal Brothers Mahmud, Josh and Xaay.”

Saurian Apocalypse arrives 13 years after the release of its predecessor, 2009’s Saurian Exorcisms, and nearly 20 years after 2004’s equally acclaimed Saurian Meditation. The album’s musical and lyrical themes detail the vexing fictional journey of Dr. Eduardo Lucciani, one of the few survivors of humanity’s self-destruction, who descends into madness after discovering the violent horrors that occur at the hands saurian masters.

Highlighted by unique instruments like the baglama saz (Turkish lute), the ancient Egyptian Anubis Sistrum, the dumbek (Middle Eastern goblet drum), the glissentar and the gongs, the album’s score weaves cinematic auras and deep grooves, accentuated by the tribal percussive styles of the original Nile drummer. Pete Hammoura and returning Saurian singer Mike Breazeale. A wealth of musical growth and refinement, both in Sanders’ guitar technique and compositional development, is startlingly evident. Aeons more than just an album of interludes or ambient scores, Saurian Apocalypse is a brilliant step up in the Saurian series, and Karl Sanders’ most dynamic and detailed solo release to date. 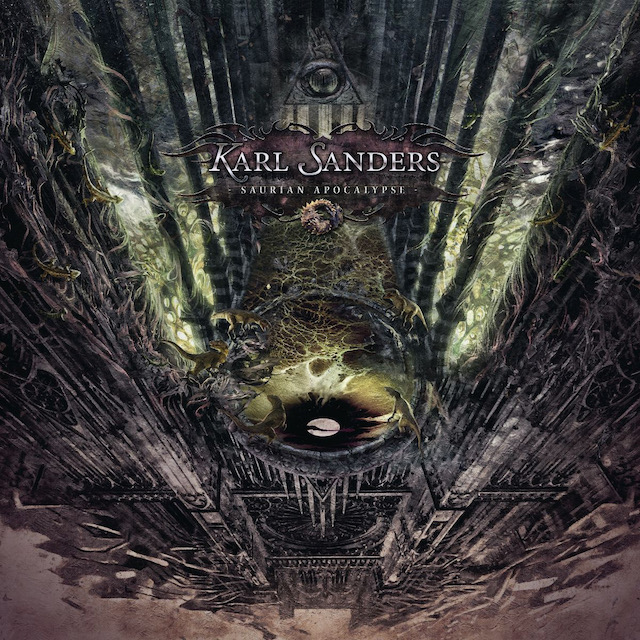 “The sun has set on the age of man”
“The disembodied but who slip among us”
“The evil inherent in us all”
“Skull Fuck Ritual” (Skull Breach Edition)
“Nada Zaag”
“An Altered Saurian Theta State”
“Nihil Emplexus”
“Divergence: The Long-Awaited Third Primordial Ascension”
“Mask of Immutable Self-Delusion”
“No creature deserves cataclysmic annihilation anymore”

Video “The evil inherent in us all”:

Video “The sun has set on the age of man”: