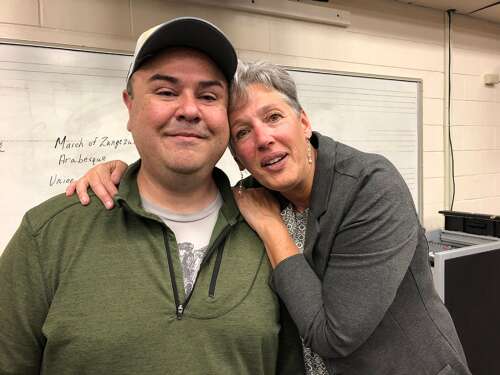 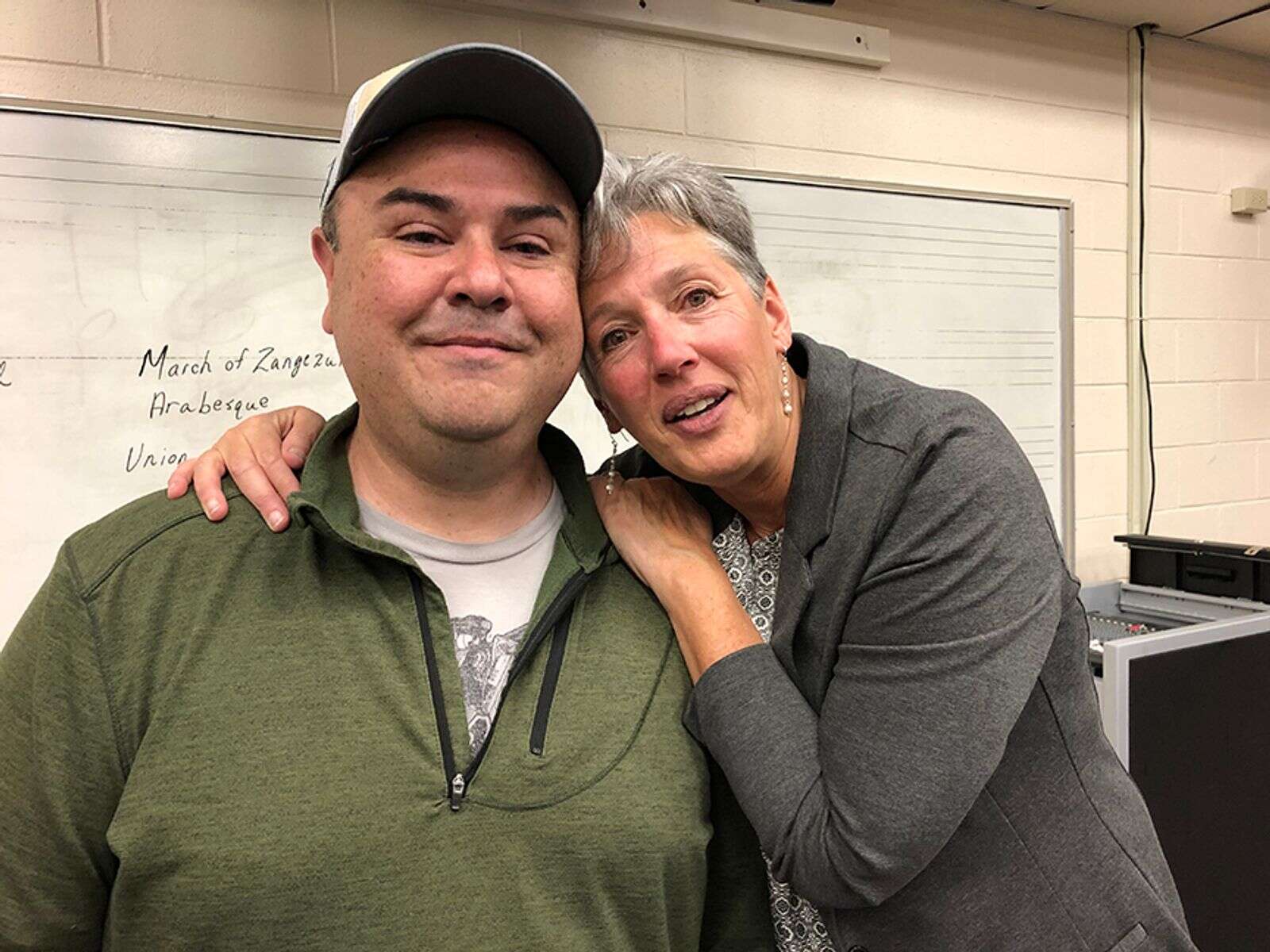 At 3 p.m., the Southwest Civic Winds will perform a gala concert at the Fort Lewis College Community Concert Hall before an appearance in Santa Fe at a national conference. Also, at 3 p.m., violinist Richard Silvers will perform late romantic music at FLC’s Roshong Recital Hall. Flutist Andreas Tischhauser will give a recital of 20th century music at 7 p.m. in the UU recital series. Originally scheduled for April 22, the recital directly conflicted with the Fort Lewis College Extravaganza.

One day we will have a master timeline so these mashups don’t happen. In the meantime, Sunday’s abundance of live performances give music lovers some tough choices.

“New Frontiers” is the official title of Sunday’s concert. It’s also a farewell for our symphonic band, which will be performing at the 2022 National Convention of the Association of Concert Bands in Santa Fe, May 3-8.

“We will be the first of 11 bands to perform,” Rhonda Muckerman said. Artistic director of the Winds since 2020, Muckerman will lead the program in the Santa Fe Hilton Ballroom. Our 46-member Durango-based ensemble will be followed by concert bands from Arizona, Denver, Albuquerque, Los Alamos, Santa Fe and Los Angeles.

Co-founded in 2012 by Ruth Katzin and Mark Walters, the ensemble has survived many changes, joining the national association is one of them.

“We’re the newest member,” Muckerman said. “We’ve never done this before, it’s a first for us.”

Sunday’s gala at the FLC Community Concert Hall is more than a dress rehearsal, Muckerman said. The program features everything from the British band’s classics to John Williams’ film music from ‘Far and Away’, to marches with unusual Middle Eastern accents, a work by Khachaturian that band member Karen Mesikapp discovered. and prepared for the set, and “Arabesque”, by Samuel Hazo.

WHAT: “New Frontiers”, a concert by Southwest Civic Winds, conducted by Rhonda Muckerman.

TICKETS: $20 adults, $8 children and students at the door.

“Jared brought that to us,” Muckerman said. “It’s yet another new frontier for the set.”

“Union of the Spirit” by Henner Mohr will close the concert. “The song reflects the history and peoples of Durango,” Mohr explains in the program notes. The work begins with a Native American song, then introduces a settler theme. The two motifs are woven together, and the two merge “into an entirely new song that’s even better than the two apart”. 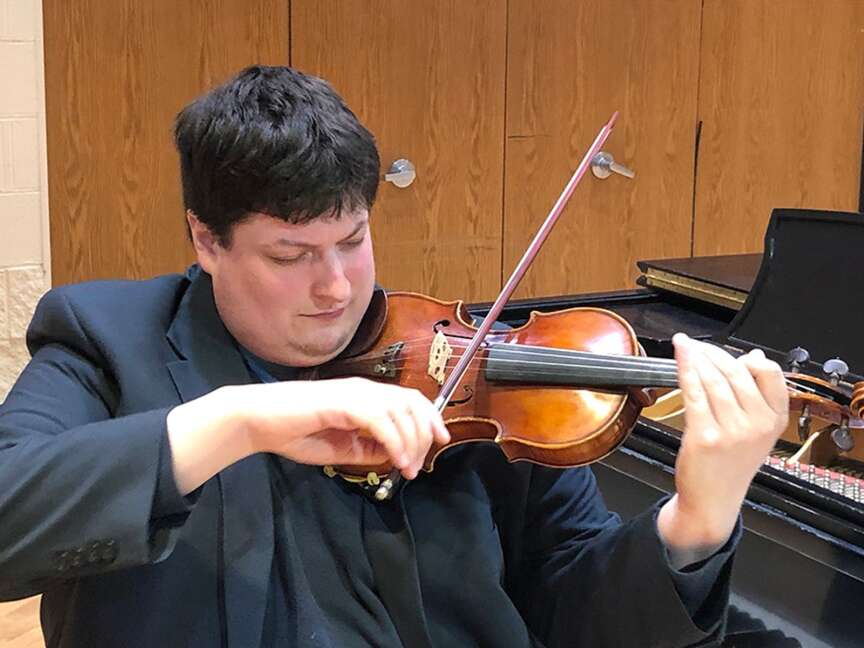 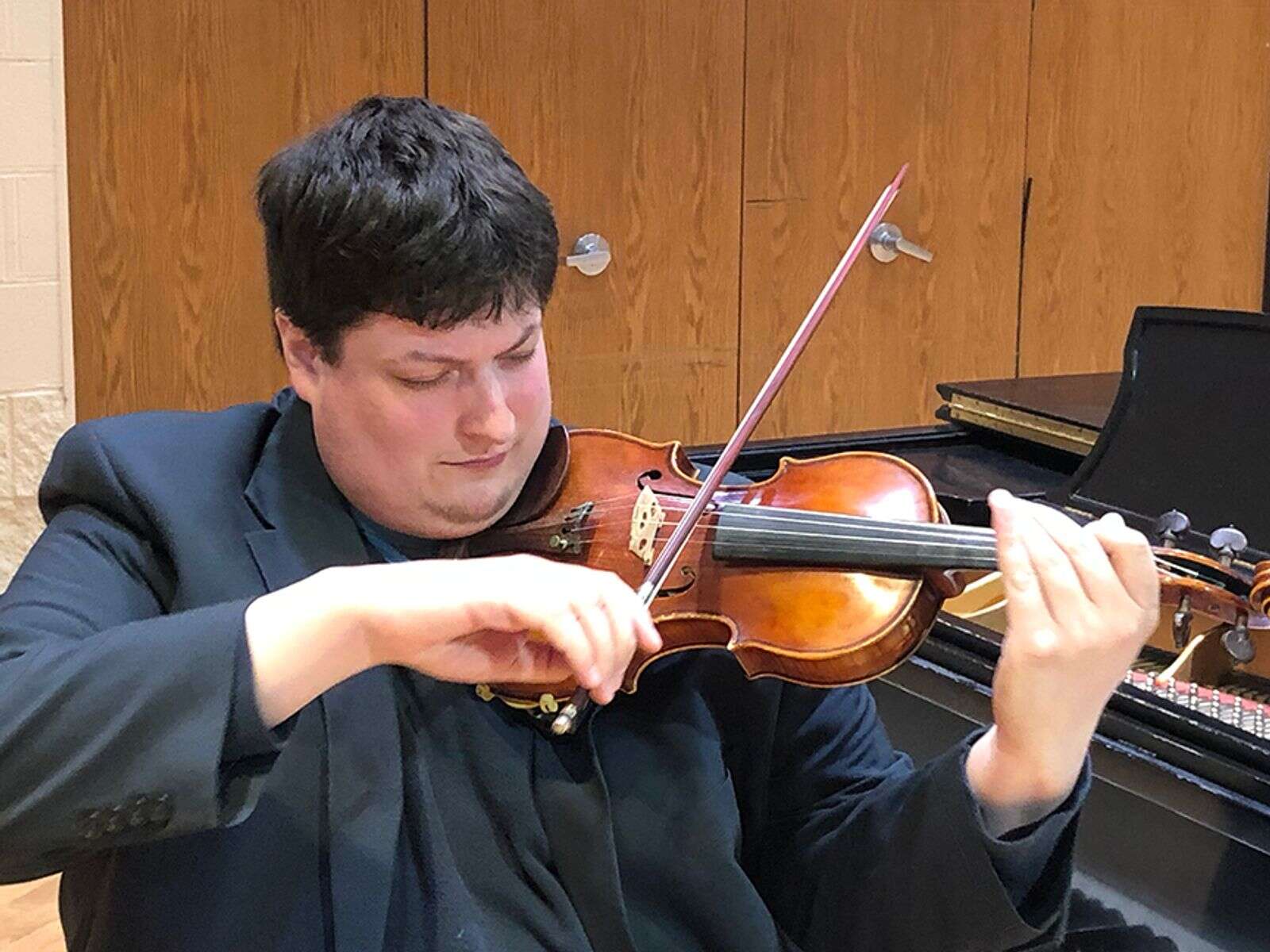 Violinist Richard Silvers will give Fort Lewis College’s only faculty of music recital this year at 3 p.m. Sunday. He will perform works by Chausson, Ysaye and Brahms.

“I don’t have to,” Silvers said. “But I love making music. The best way to celebrate the beauty of the past is to play it and communicate it to my students.”

Last fall, Silvers joined the FLC faculty. He teaches music history, theory, strings and chamber music. He has 10 students in his violin studio, and every Friday Silvers hangs out “with the students of the Durango High School Chamber Orchestra.”

In 2021 he completed his doctorate at the University of Wisconsin – Madison focusing on Edward Elgar’s Violin Concerto, “an overlooked gem of early 20th century violin repertoire”. In addition, he has a long performance record as a soloist, chamber musician and orchestra to which he added the FLC Faculty Trio and the San Juan Symphony.

“Poem by Chausson, op. 25′ is a very lyrical rhapsody of 17 minutes. Ysaye’s Sonata No. 4 in E minor for solo violin was composed in 1922-24 and is dedicated to Fritz Kreisler, the most famous violinist of the 20th century. Elgar dedicated his concerto to Kreisler,” he said.

After the intermission, Silvers and pianist Holly Quist will perform Brahms’ Sonata No. 3 in D minor for violin and piano.

“Brahms was a proponent of absolute music as opposed to Wagner’s programmatic music,” Silvers said. “This sonata is about 25 minutes long and is essentially a piano concerto with violin accompaniment. This is Brahms’ last sonata. It has four movements, not three like his earlier sonatas, and is filled with cross-rhythms, shifts and complicated shifts. To understand Brahms, one must be patient. 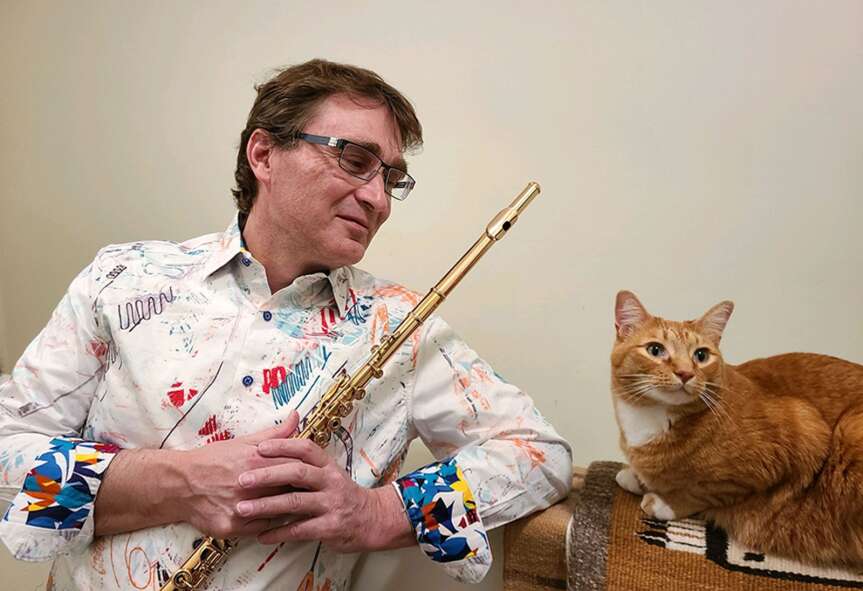 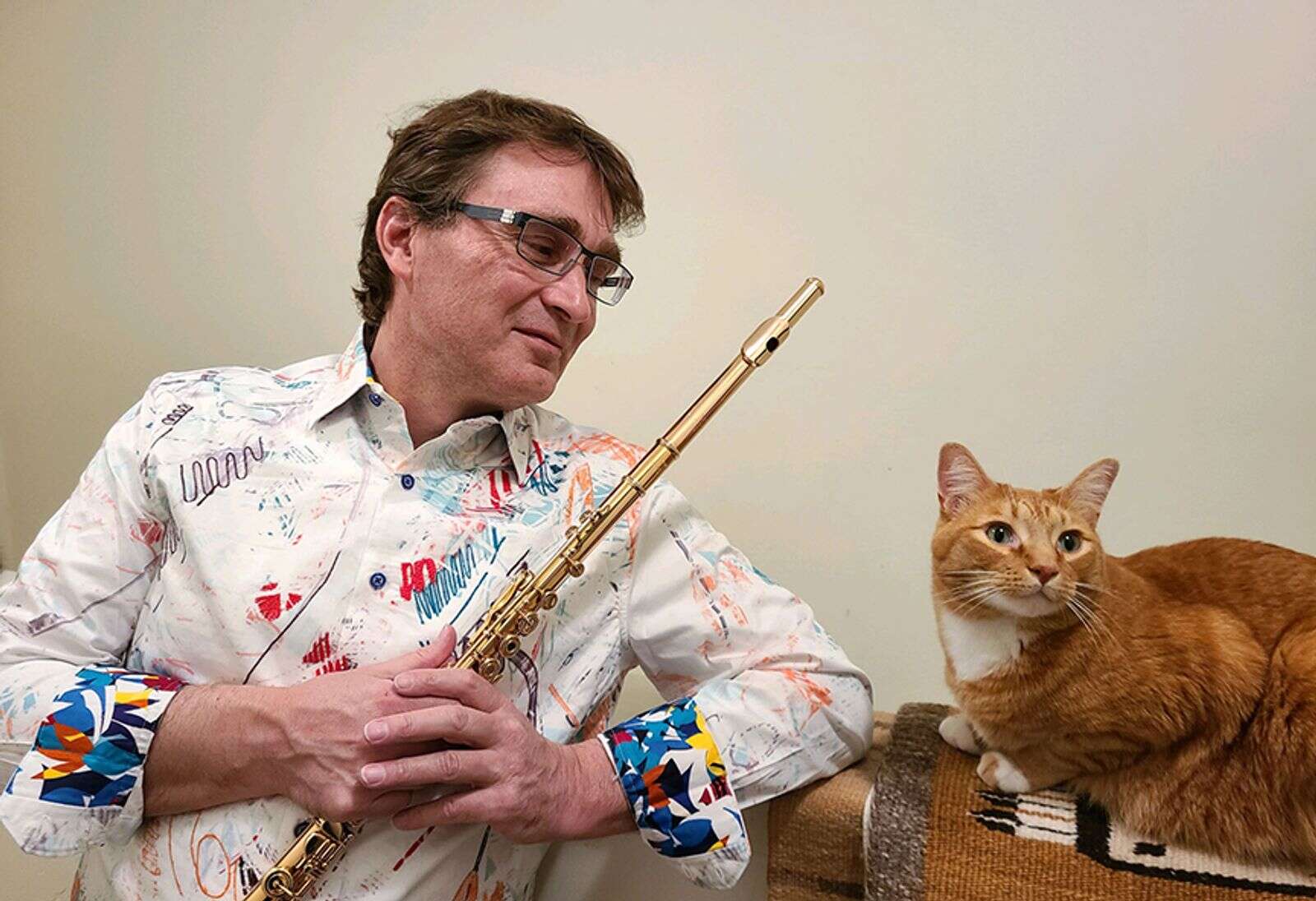 Cruising through the 14th season of unusual chamber music offerings, The Unitarian Universalist Fellowship of Durango presents another stellar program Sunday night. You won’t find a program like this anywhere else.

At 7 p.m., flautist Andreas Tischhauser and pianist Marilyn Garst will present four 20th-century works by composers from the former Soviet Union to the Czech Republic, France and America.

“It’s a virtuoso duet program,” Garst said. “We will begin with Bohuslav Martinŏ’s ‘First Sonata for Flute and Piano’. He was a well-known Czech composer who was blacklisted by the Nazi Party. He fled to Paris in 1940, then fled to the United States and taught at Berkshire Music School in Princeton and Tanglewood. This work was composed in 1945.

Otar Takakishvili’s “Sonata for Flute and Piano” features a “rather simple harmonic language with folk influences,” Garst said. Born in 1924, the Soviet composer imposed himself within the strict creative limits of the arts of the Soviet era. He won the Lenin Prize in 1982, Garst said, and like Shostakovich, with whom Takakishvili had a lifelong friendship, “he was under restraint.”

French music with Impressionist influences will provide a decided contrast, Garst said. Henri Dutilleux’s “Sonatine” was composed in 1943 and is part of a relatively small body of work.

“The ‘Sonatine’ is the most recorded of all his compositions,” said Garst.

To close the program, Tischhauser and Garst will perform Eldin Burton’s “Sonatina for Flute and Piano”. Adapted from a work for solo piano, the flute revision was dedicated to Samuel Baron, another Juilliard student, who premiered it in 1947.

And Tischhauser’s take on a program he and Garst have been rehearsing for months?

“This music is more difficult than any of my recitals, even my doctoral recital,” he said.

Judith Reynolds is an arts journalist and member of the American Theater Critics Association.