(LONG BEACH ISLAND, NJ) — Lighthouse International Film Society will present the 2022 Academy Award-nominated series of shorts at the Long Beach Island Arts & Sciences Foundation on March 18-19, giving you the chance to choose the Oscar shorts winner! There will be three separate screenings for the three categories of short films. Movies are $10 online / $12 at the door. There is a $25 discount for all three screenings – (animation, live action and documentary) Choose your favorite genre or come to all three. NOTE: These films are for mature audiences only.

IN MY THOUGHTS – Henrik wants to sing a song for his wife. It has to be today, it has to be now. It’s a matter of life, death and karaoke.

PLEASE WAIT – In the not so distant future, Mateo (20, Latino) is arrested by a police drone without explanation. Finding himself locked in a fully automated prison with no recourse, Mateo realizes he’s fallen through some sort of loophole in the system. To get out alive, he will have to face the labyrinthine and computerized bureaucracy of privatized American justice, in search of a real human being capable of redressing the situation.

ALA KACHUU-TAKE AND RUN – Sezim, 19, wants to fulfill her dream of studying in the Kyrgyz capital when she is kidnapped by a group of young men and taken to the hinterland. There she is forced to marry a stranger. If she refuses marriage, she is threatened with social stigma and exclusion. Torn between her desire for freedom and the constraints of Kyrgyz culture, Sezim desperately searches for a way out.

Advertise with New Jersey Stage for $50-$100 per month, click here for more info

THE LONG GOODBYE – Rice and her family are preparing for a wedding celebration when the events unfolding in the outside world suddenly come to their doorstep. The result is a devastating and visceral cinematic feat, and a poignant poetic cry from the heart.

THE DRESS – Lust, sexuality and physicality. It’s the deepest desires virgin Julia stifles by working in a roadside motel. Until she crosses paths with a handsome trucker, who soon becomes the object of her fantasies…

Animated short films – Saturday March 19 at 1:00 p.m.. Total duration: 97 minutes with 5 nominated short films. Short films in the Animation category explore a range of adult topics through a diverse range of animation styles. Score equivalent to R. No children should be admitted under any circumstances. 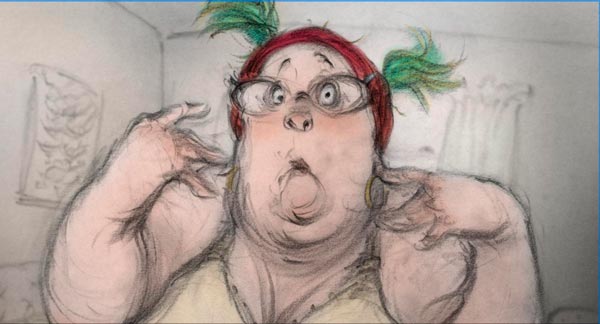 BUSINESS OF ART – Director Joanna Quinn and producer/screenwriter Les Mills continue the series of beloved, hilarious and award-winning British animated films starring Beryl, a 59-year-old factory worker obsessed with drawing and determined to become an artist super futuristic. We also meet her adult son, Colin, a techno geek, her husband, Ifor, now a model and face of Beryl, and her sister, Beverly, a narcissist fanatic living in Los Angeles.

BESTIA- Inspired by real events, BESTIA enters the life of a secret police agent under the military dictatorship in Chile. The relationship with his dog, his body, his fears and his frustrations, reveal a macabre fracture in his mind and a country.

ROBIN ROBIN – An Aardman Production is the story of a little bird with a very big heart. After a shaky manger — her unhatched egg falls from the nest and falls into a dumpster — she comes out of her shell, in more ways than one, and is adopted by a loving family of mouse burglars. More beak and feathers than fur, tail and ears, more cluck and klutz than tiptoe and stealth, she is nonetheless loved by her adoptive family, a daddy mouse and four siblings.

BOXBALLET – The delicate ballerina Olya meets Evgeny, a rough boxer who personifies “strong but silent”. With very different lives and worldviews, will they be brave enough to embrace their feelings? Can two fragile souls hold on despite the cruelty of the world?

WIPER – In a café, while smoking an entire pack of cigarettes, a man asks an ambitious question: “What is love?” A collection of vignettes and situations will lead the man to the desired conclusion.

AUDIBLE – A cinematic, immersive coming of age documentary following Maryland School for the Deaf high school athlete Amaree McKenstry and her close friends as they face the pressures of senior year and grapple with realities to venture into the world of hearing people. Amaree and her teammates vent their frustrations on the football field as they fight to protect an unprecedented winning streak, while coming to terms with the tragic loss of a close friend. It is the story of children who resist adversity. They face conflict, but face the future with hope – shouting to the world that they exist and matter.

THE QUEEN OF BASKETBALL – She is one of the greatest living basketball players. 3 national trophies. Scored the first basket in women’s Olympic basketball at the 1976 Olympics. Drafted to the NBA. But have you ever heard of Lusia Harris?

Advertise with New Jersey Stage for $50-$100 per month, click here for more info

WE WERE THE BUBBLES – A mind-blowing coincidence leads the filmmaker to reunite with his fifth-grade class and fifth-grade teacher to examine their memory and complicity in a bullying incident 50 years ago.

DRIVE ME HOME – 500,000 Americans are homeless every night. LEAD ME HOME is a short documentary by Jon Shenk and Pedro Kos that captures the experience from multiple angles. This immersive, cinematic film personalizes the crushing problem by telling the real stories of those who go through it as a first step towards challenging uninformed attitudes and outdated policies and gives audiences a rare, deep look at the scale, the scope and diversity of homeless America today.

THREE SONGS FOR BENAZIR – The story of Shaista, a young man who, newly married to Benazir and living in a camp for displaced people in Kabul, struggles to reconcile his dream of being the first of his tribe to join the Afghan National Army with the responsibility of start a family. Gulistan and Elizabeth Mirzaei’s remarkable access shines a light on the experience of Afghans today who live, love and seek space for themselves amid constant instability. THREE SONGS FOR BENAZIR was nominated for the 15th annual Cinema Eye Honors and won six Jury Awards, including Best Full Frame Short Film.

The tickets are available for purchase in line.