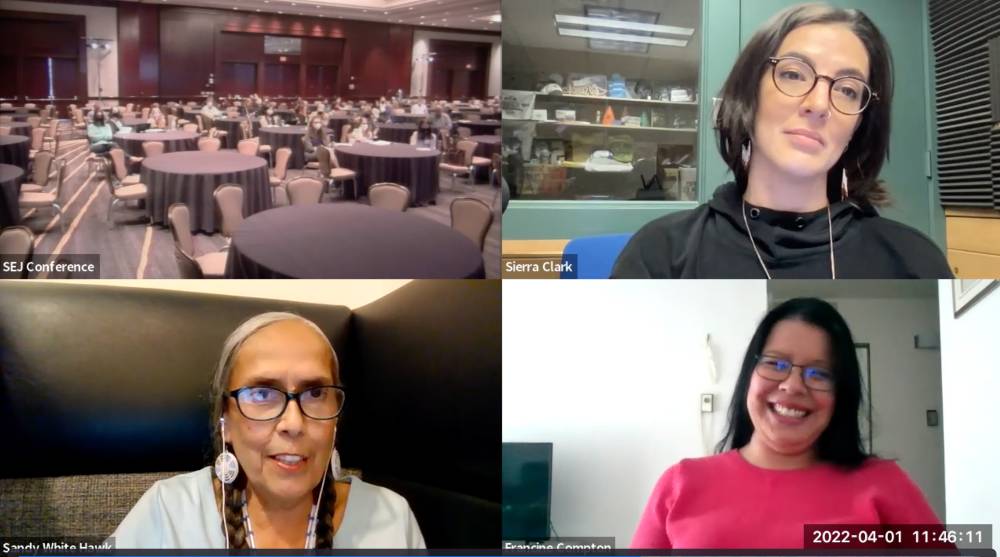 They are three powerful people from tribes across Indian country whose words struck with the full force of truth for an hour and 15 minutes. Attending the panel was, perhaps, the quietest group of reporters I have ever seen. They listened. They took notes. They thought about what they heard.

Francine spoke of the “bingo cardencouraging journalists to use it and if they got “bingo”, or even close to “bingo”, there is probably something wrong with the report, among others, including the NAJA Spotlight report , analyzing the New York Times‘Generally poor coverage of Native Americans.

Never miss the biggest stories and breaking news from Indian Country. Sign up to receive our reports straight to your inbox every weekday morning.

Sierra talked about what it’s like to work in a newsroom as the only Indigenous person.

And Sandy talked about what reporters do wrong when interviewing him – and that was a lot.

Because journalism is inherently extractive.

I could get poetic about the profound insights these powerful women shared – but instead, I encourage you to watch or listen to the panel for yourself, here.

Since our panel was taking place in the same room as the lunch plenary, we finished at 12:15 p.m., as hungry journalists walked in for lunch.

And it was during the full lunch that I started to feel cynical and naughty, as I hear techs bragging about drums and carbon capture and I smell the stench of capitalists vying for ink and media attention.

At a conference of journalists.

As one of the participants told me afterwards: “This panel made me realize that environmental journalists are not necessarily environmentalists.”

I politely excused myself from the lunch, which felt like a sales pitch with five Meta men on a TEDx stage.

When I entered the corridor, other women were there and others followed me. As one woman said, “I can’t believe the main plenary is a manel”.

After some time chatting with other women in the hallways, it’s time for the next panel, on landfills, and then a special US EPA press conference, which wasn’t so much groundbreaking as it was disappointing – more of cheerleading than answers or responsibility. Some of the regional representatives, who were supposed to be available to answer questions directly from the press, never showed up.

As the afternoon progressed into the evening, I felt relieved that our panel was so well received. I keep hearing kind words about it, which is nice.

We really don’t use enough words to say what’s right in journalism, let alone society. Feedback is and was appreciated.

Do you enjoy an Indigenous perspective on the news?

For the past decade and more, we’ve covered important Indigenous stories that are often overlooked by other media. From the protests at Standing Rock and the toppling of colonizer statues during the racial equity protests, to the ongoing epidemic of Murdered and Missing Indigenous Women (MMIW) and delinquent accounts related to assimilation, cultural genocide and at Indian Residential Schools, we were there to provide an Indigenous perspective and elevate Indigenous voices.

Our short stories are free to read for everyone, but they are not free to produce. That’s why we’re asking you to donate this month to support our efforts. Any contribution – large or small – helps us to remain a force for change in Indian Country and to continue to tell the stories that are so often ignored, erased or neglected.

Author: Valerie Vande PanneE-mail: This email address is protected from spam. You need JavaScript enabled to view it.