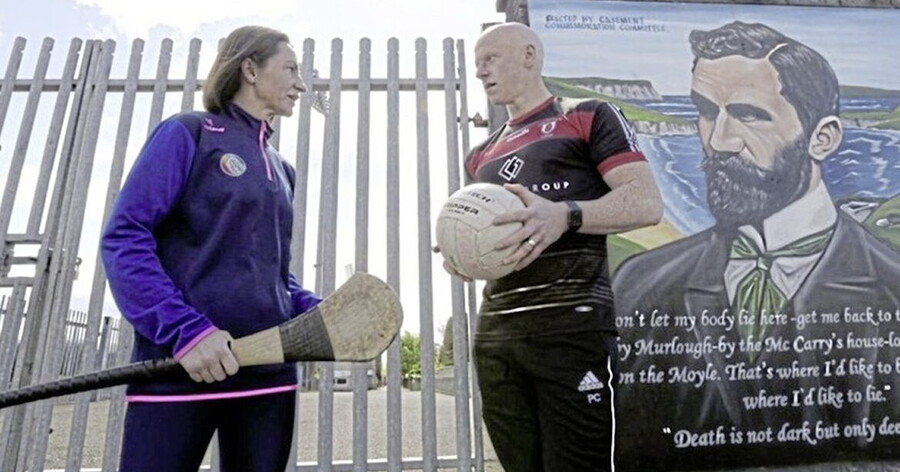 The GAELS are on the move – with or without the official backing of Croke Park or recognition from Leinster House.

It was a very successful and well-attended event where GAA personalities Terence McNaughton, Jane Adams, Paddy Cunningham and Ashling Thompson gave their thoughts on the trajectory they envision for the Gaels La Chéile campaign, which continues to pressure the Taoiseach to launch the debate for Irish reunification and wants the formation of a fully representative Citizens’ Assembly to help prepare the ground for a referendum.

Last month, and to mark its centenary, the Seanad announced that it was inviting submissions on “the constitutional future of the island of Ireland” and wanted to hear from “interested individuals, groups and organisations… and welcome the voices of the unionist community and their vision for the future.”

Gaëls La Chéile would come under the category “interested groups”. For some GAA members, they might feel uncomfortable about the Gael-on-Gael initiative, conceived in Antrim at the start of the lockdown, as it is too political and potentially divisive within and outside the Association.

It started under the ‘Letter from Gaels to the Taoiseach’ banner in May 2020, which was led by former Antrim players Jane Adams and Paddy Cunningham.

A few casual chats over coffee made the legs grow and soon more than 3,000 Gaels in Antrim alone had signed the letter – including throwers and senior county footballers.

Running now under the universal name – Gaels La Chéile – there is huge energy surrounding the campaign if last night’s roundtable was to be believed.

Some will say that those who have expressed support for the aims and objectives of the group that footballers, bowlers, camogs, handballers and all other grassroots members should stick to playing the Gaelic Games and leave politics and discussions of Irish unity to the elected classes.

We’ve heard the refrain that’s probably ingrained in all of us now: never mix politics and sports. But what if the politics of the day let people down? So many people have completely drifted away from northern politics due to its stagnant nature.

Gaëls La Chéile is indeed civil society reaching out, getting together, demanding a better way forward, pushing for a less tribal policy.

The pitcher at Dungiven and the footballer at Swanlinbar are as much part of civil society as they are part of the GAA.

Why should GAA members keep their heads down and stick to playing football or hurling?

In fact, should they be encouraged to engage in such age-defining debates and try to improve the society in which they live?

The ramifications of “Brexit” have undoubtedly accelerated the debate about what a new Ireland might look like and the place of trade unionism within it.

Why rely on intermittent elections that produce exactly the same results as last time, no matter how many times we put an “X” next to someone’s name in a voting booth?

If civil society manages to organize itself and build a fully representative Citizens’ Assembly, this could be the only vital dynamic that makes the current political system more flexible.

When asked if politics and sport should mix, Terence McNaughton used the campaign Antrim pitcher Neil McManus has been involved in for the past few years.

The Cushendall clubman has been a strong supporter of the Royal National Lifeboat Institution [RNLI] which has significantly improved the general well-being of isolated rural communities through better emergency services and benefits.

The life of Neil’s own father [Hugh] was rescued after suffering a heart attack when a first responder arrived on the scene. First responders work hand in hand with the local RNLI.

McManus has used his well-known GAA player profile in a meaningful way, to improve his community through his “Respect the Water” campaign and other related campaigns.

There are more defibrillators in rural areas and in GAA clubs by him to raise awareness. So if someone like Neil McManus can play an active role in improving the community he lives in, why shouldn’t he do the same on a national level?

The Gaels La Chéile campaign has good intentions at heart.

“When the Good Friday Agreement was signed here, I was only 15,” said Jane Adams.

“I felt there were new opportunities ahead, it felt like a fresh start. When you think of our parents at that age, their opportunities were completely limited in terms of education and job prospects.

“We are the generation that benefited from the Good Friday Agreement and looking to the future for the next 25 years, I see so many more opportunities for society to go further, and I wish that be done in an inclusive way, without fear or prejudice.”

She added: “Everyone has the right to feel no fear and that everyone is equal. Everyone should be allowed to be who they are and what they are without fear or prejudice. This is what I hope and that this country belongs to everyone, so that they can celebrate their identity in the form they wish.

There have been a few slingshots aimed at the GAA over the past two months from political unionism and others.

And there will be others in the direction of the Association in the future because Gaëls La Chéile has the “temerity” to campaign for Irish unity.

But the political discourse here is in dire need of a change of direction.

Civil society must flex its considerable muscle. The GAA player is as much a part of civil society as anyone else.