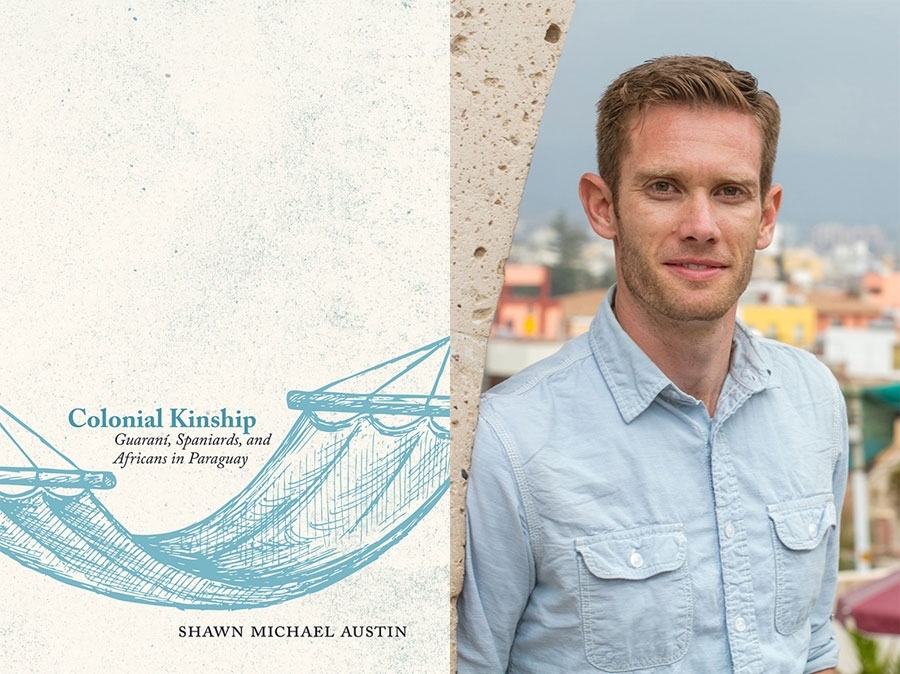 Shawn Austin and the cover of the book “Colonial Kinship: Guaraní, Spaniards, and Africans in Paraguay”.

A recent monograph by U of A associate professor of history Shawn Austin has been recognized as a finalist for a National Book Award by the American Society for Ethnohistory. Austin’s Book, Colonial kinship: Guarani, Spaniards and Africans in Paraguay, published by University of New Mexico Press, was named a finalist for the Erminie Wheeler-Voegelin Book Award, given to the best contribution of a book to ethnohistory. He received an honorable mention alongside 2021 Book Prize winner Heidi Boaker, who won for Doodem and Council Fire: Anishinaabe Governance by the Alliance (University of Toronto Press). The prize is awarded in memory of Dr Erminie Wheeler-Voegelin (1903-1988), who was a noted anthropologist and former editor of the Journal of American Folklore.

VSColonial kinship was honored for its unique approach to the history of contact between Spanish colonizers and the indigenous Guarani tribes in Paraguay in the 16th and 17th centuries. Austin argues for a more complex understanding of this period that involves moving away from studying isolated indigenous peoples or emphasizing the sources and perspectives of Jesuit and Franciscan missionaries. Instead, he uses an approach familiar to anthropologists, focusing on cultural practices that have emerged from a wider range of interactions and sites of contact between groups in the region. As he explains in the book, “Colonial kinship focuses on Guaraní in contexts of contact and exchange with spanish, Africans and people of mixed descent in reducciones and in Spanish towns, especially in the provincial capital of Asunción. In a statement, critics of the prize noted the benefits of this approach. They wrote: “Drawing on Guarani, Spanish and Portuguese sources and approaching them from an agile and interdisciplinary perspective, Austin highlights highlight the voices and priorities of historically marginalized actors, including Indigenous women. In doing so, he reclaims a colonial world of contestation, negotiation, mutual identification and compromise, not just exploitation.”

Colonial kinship has already been awarded in 2021 with the Bandelier / Lavrin Book Prize in American Colonial History from the Rocky Mountain Council of Latin American Studies.

Austin teaches courses in colonial and modern Latin American history, and he is an affiliate faculty member of the Latin American and Latin American Studies program and the Honors Humanities Project at the U of A. He is currently working on a new book project analyzing Guaraní material culture and linguistic sources to offer a new account of indigenous conflicts with Spanish and Portuguese forces in the Rio de la Plata region during the 18th century. He has also participated in several translation projects in Guaraní and Spanish.