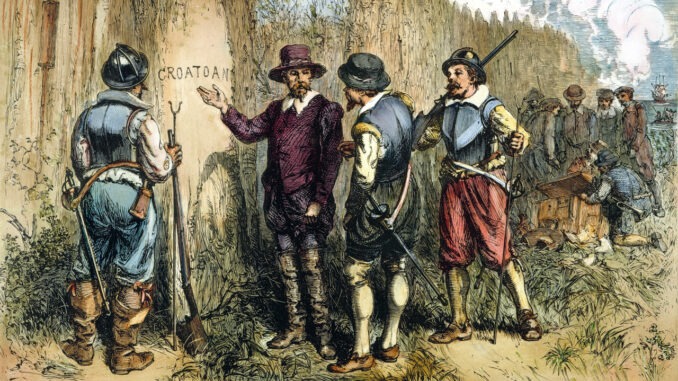 Strong new archaeological evidence uncovered by the Croatoan Archaeological Society (CAS) will help dispel the myth that more than 100 English and Welsh men, women and children ‘wandered away through the dark forest’ in a shroud of mystery and fantasy . They weren’t lost. In fact, they left a sign indicating where they were heading.

This latest discovery will show that many – if not all – were picked up by the peaceful local Croatoan tribe and driven from Roanoke Island to a beautiful paradise called Croatoan. Today we call this paradise Hatteras Island.

The latest project was led by CAS Chairman and Founder, Author and Historian Mr Scott Dawson, and carried out under the supervision of Dr Mark Horton, esteemed British maritime and historical archaeologist, television presenter and writer.

Recently, Dawson was invited to speak to scholars and the public at a three-day history symposium in Manteo, North Carolina, on the topic of Native Americans and the fate of the “lost colony.”

According to Dawson, “We now have solid, evidence-based information and artifacts indicating that English people lived with native Croatians on present-day Hatteras Island in the 16th century; not the fifteenth or seventeenth century, but the sixteenth century.

It has not been disputed by the public that the colonists being ‘lost’ is a myth based on a fictional play, The Lost Colony, and intended to entertain the public and not to educate them on the true historical narrative of this that actually happened to the settlers. Nor was there any doubt that the third attempt at colonization of the new world and the fate of the colonists was well documented by first-hand accounts written by Sir John White and Sir Thomas Harriot.

These primary sources explain that the settlers were instructed to leave a sign if they were to leave the settlement: the name of the place they were going. If they left in distress, they had to add a cross. When Sir John White returned from a trip to England to refuel, he found the word “Croatoan” carved into a picket fence and the letters “cro” carved into a tree with no cross underneath either. Unfortunately, circumstances prevented him from traveling to Croatoan, present-day Hatteras Island, and searching for them further.

After nearly two decades of searching, the Croatian tribe and over 100 settlers will take their rightful place in history as found and not lost. “It will be quite difficult to challenge this as anything other than fact after May 8,” according to Dawson.

About the Croatian Archaeological Society

The Croatoan Archaeological Project (CAP) is an ongoing archaeological research project carried out on Hatteras Island by Dr Mark Horton, Professor of Archeology at the University of Bristol, England, in collaboration with the Croatoan Archaeological Society (CAS ) in the designated Smithsonian area. 31DR1. The goal of this project is to learn as much as possible about the history of Croatoan, the modern island of Hatteras, and about the inhabitants of said island, via the scientific methods of archaeology. Artifacts are currently on display at the Hatteras Public Library/Community Building in the Village of Hatteras and the Hatteras Island Ocean Center also located in the Village of Hatteras. For more information on CAS, visit http://www.casatteras/index.html.

Mr. Scott Dawson is a researcher, author and president and founder of the Croatoan Archaeological Society, which conducted archaeological digs on Hatteras Island, a barrier island off the coast of North Carolina, to uncover the mystery of what happened to members of the “Lost Colony” in nearby Roanoke. His recent book, The Lost Colony and Hatteras Island, documents his team’s discoveries over the past decade. Dawson himself is a native of the island Hatteras, having grown up less than a mile from the site of the Croatoan village, his family can trace their roots on Hatteras back to the 1600s when a Dutchman named Thomas Mueller was shipwrecked on the island, was rescued by Croatoan Indians and later married a Croatoan woman named Rea.In 2002, Scott graduated with a degree in psychology with a minor in history from the University of Tennessee.Dawson currently resides in Kill Devil Hills with his wife and two daughters. Previously he resided on Hatteras Island and ran the local Croatoan Inn and Museum in Buxton.